Most gardens and farms around the world have had the same basic approach for millennia. First you clear the land (often with fire), till the land, plant your food, then weed and water, repeat as deemed necessary, followed by the harvest.

Tilling has been considered a good thing because it turns over the top soil, bringing fresh nutrients to the surface while burying the other vegetation and the previous year’s crop waste – providing a seed-free medium for planting an alternate crop. This initially provides a lot of fertility because it kills a lot of the organisms in the soil and that rot provides nutrients. Tilling ultimately shakes down the smaller materials (these have more surface area for hosting beneficial micro organisms). Over time, the small materials are compacted down into an acidic hard clay pan at the bottom which then needs to keep being broken to mix the material. The larger materials are left near the surface, where, being larger with less surface area, they dry out and drain quickly, often becoming salty because of its drying effect. The tilled soil is also left open and barren. Even when planted with crops much of it is kept cleared by weeding, leaving the soil vulnerable to compaction – removing air from the soil, killing more organisms. The crop takes up the nutrients from the soil and then is removed from the soil when harvested year after year. Overtime the soil fertility goes down because only so much nutrition can be removed and you can only kill so much soil life before there is nothing left alive. Once the soil is fully exploited, there is nothing left to provide nutrients to your plants. The traditional response to this is to leave the land go fallow (letting it go wild), and clear some place else to till again until the fallow land recovers. This is what we are currently seeing in the Tropics, most popularly in the Amazon (and the most media-reported of late, Malaysia – where fires for clearing new land has caused international smog problems).

a new perspective took hold – we can take control of our environment with chemistry. Through this worldview it was discovered that all that plants needed to grow is a set of specific elements – Nitrogen, Phosphate, and Potassium, often referred to as NPK (the K is for Potassium) and different plants required different proportions of those. Once it was discovered that acids could be industrially manufactured, it was then possible to lock up these major elements for storage and travel. This is mostly done in salts, with the major element suspended within. This is then spread on the soil and washed in to release the element which is then drunk by the plant. Along with it came everything else commonly used in conventional agriculture – Pesticides, Fungicides, and Herbicides. This approach was considered very economical as it is convenient and simplifies the processes. It created a whole industry that we see everywhere today. 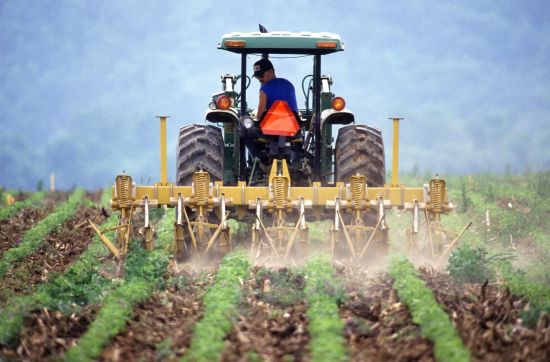 What the modern chemical fertilizer approach ignored was that plant nutrition is so much more complex than that, requiring a larger set of about 12 elements and about 25 trace elements that are essential parts for the health, vitality and immunity of plants. And they needed all of these elements accessible in different ways, not just blended and liquid fed.

The plant interacts with the micro organisms with its root hairs to obtain the nutrients it requires, supplying starch to the micro-organisms in exchange. The equivalent to walking to the market and bartering for healthy food to eat. Having the elements drunk by the plant is comparable to driving to a fast food joint for a slurpy cup of blended carbs and little nutrition. The root hairs are no longer needed, and so they wither, leaving no place to ‘barter’ – no place to host the soil organisms. Also, because of the salts, the plant has to drink more. So what you get is a lonely, obese plant. This leaves the plant without nutrient density, but large volume. This is why you get the ‘fullness’ of foliage and flowers, but not the fitness to fight off the pests when using chemical fertilizers.

So what comes next are predators– or what are normally referred to as ‘pests’. And having a vast monoculture field filled with weaker plants, it is a buffet of easy food for the predators. This brings in the response of pesticides, that happens to also kill the bacteria in the soil. The bacteria had shaped the soil crumb structure, so without it the soil collapses – making it more necessary to aerate the soil with tilling so water and air can penetrate.

If it is a humid or wet year, the already water-bloated plant is susceptible to harmful fungi. So fungicide is applied, which also kills the beneficial fungi in the soil that bring back minerals from great depths and distances. This causes more soil collapse, making it more airless, waterlogged and raising the acidity, favoring the anaerobic micro organisms that are more harmful to the plants. This compaction also increases the water runoff and therefore erosion.

These three _cides are a Biocide Cocktail, making it just a matter of time before the amount of money put in is bigger than the money gotten out for the work. This is because there is no recovery system in the soil. Not to mention that the Fertilizer, Pesticide, Fungicide, and Herbicide are all based on the fossil fuel industry which will become scarce, as the increased prices show. Where it is virtually past the break even point and has become cheaper to be organic.

Many hail Organic as the solution to the problem, but Organic-grown foods only solve part of the problem, and sometimes are merely ‘greenwashing’ what is being done, and sometimes are even more destructive than chemical dependent agriculture, because it often still is industrial agriculture. Organic doesn’t mean that its sustainable. You can plough up and down steep cliffs and be organic; You can enslave lots of people and be organic; You can exploit water tables and be organic; You can transport compost thousands of kilometres in large trucks and be organic. For the most part Organic just means not using pesticides, fungicides, or herbicides – so long as they are not ‘synthetic’ treatments. With so much invested in the crops, most opt for ‘natural’ treatments when the predators come around, which do the same basic thing with little difference in outcome. If not using the ‘natural’ sprays, really cheap labour is hired to hand pick the weeds and pests. These workers often have no workers’ rights and receive little pay, virtually being slave labour. Land is still cleared, there is still mass monoculture, aquifers are still tapped, land is still tilled, and weeding and killing pests and fungi are still rampant. All of these degrade and kill the soil and therefore the ecosystem, with the exception of aquifers (these will, however, be unable to replenish themselves and will be an unreliable water source.)

But Wait, The Soil Can be Killed, So Soil is Alive?

Oh yeah, it sure is! There is no larger, more complex, more diverse life system in the universe that we know of than soils.

99% of these have yet to be named and very little is known about the 1% that is named. The groupings, ‘good’, ‘bad’, and categories of these lifeforms are not yet known. The categories are just starting to be established now.

All this was revealed through the discovery that health and nutrition are definitely linked. There is a lot of connection between soil life and its ability to mobilize nutrients and make them available to plants through the root zone interaction; you can’t really feed the plants well organically, you have to feed the soil and the soil organisms feed the plants all the nutrition they need. With the soil ecosystem maintained, it does all the intricate and diverse feeding of the plant with the exchange of carbon through the root zone.

How to get your soil healthy again to make your plants healthy takes some unconventional methods.

The most commonly accepted one is compost – love the rot and ensure it rots well, is highly aerated and about half and half of dry and wet matter. Dry matter is stuff like dry grass, wood chips and leaves, and wet matter are things such as fresh plant by-product or even dead animals. I’d stick to the plant based stuff if you’re new or a bit squeamish. If you’re in an small place I recommend a vermi-composting bin (worm farming). The resulting soil is then added to your garden.

The other method is to embrace the weeds. Yup, that is what I said. Weeds are your friend.

They are like the paramedics working in a disaster zone. They are part of the natural succession process of recovering disturbed land, and are support species for the soil – stabilizing soil and water resources, and providing habitat while other longer lived species become established. If they are too thick around your individual plant, just chop them off from the base (leave the roots in the soil, they are important), and drop them right there to mulch down. You shouldn’t have any exposed soil. This leads to the most unconventional of all methods.

Do not till, ever. Why? Because it destroys the root systems of beneficial fungi that share nutrients throughout the soil, exposes the beneficial bacteria and other organisms and kills them, and it shakes the clay particles down lower and pulls the larger particulate up to the surface. This creates an anaerobic (airless) base that is deadly for organisms, and leaves you with sandy soil on the surface. It’s akin to breaking skin, it is far more susceptible to disease and bleeds out. Not a very good idea.

To regain soil fertility life has to be encouraged in the soil because it’s life that recycles nutrients. When the soil remains intact, the root systems of the weeds can aerate the soil, protect the surface from rain impaction – preventing a hard top on the soil and therefore erosion; become their own mulch at the end of their life cycle, and provide habitat to beneficial micro-organisms. Without soil disruption the beneficial fungi can take root and establish connections between the plants and other soil organisms. Life is good.

Watch these videos to learn more on how to start your garden right and grow your own or a community food forest!

(To learn more about how to have fertile prosperous land that mitigates flood and drought. Or alternatively live in an area that is prone to fires and floods and want to know solutions. Go to the article Cultural Quandaries: Water)