I’ve been back a few days from having gone to Trillium War – the biggest event the Kingdom of Ealdormere holds.

That is where I tested the Faux woad and faux lime wash hair with my Pictish persona. I didn’t have Trews (plaid trousers) for my persona so I opted for using a plaid wool blanket I had as a Belted Plaid / Greater Kilt – apparently there are pictish stones that show belted plaids or robes of deeply pleated material (source: ‘Pictish Warrior AD 297-841’, by Paul Wagner, Illustrated by Wayne Reynolds), so I didn’t see a problem using it, let alone it expanding the amount of canvas to test the faux woad. 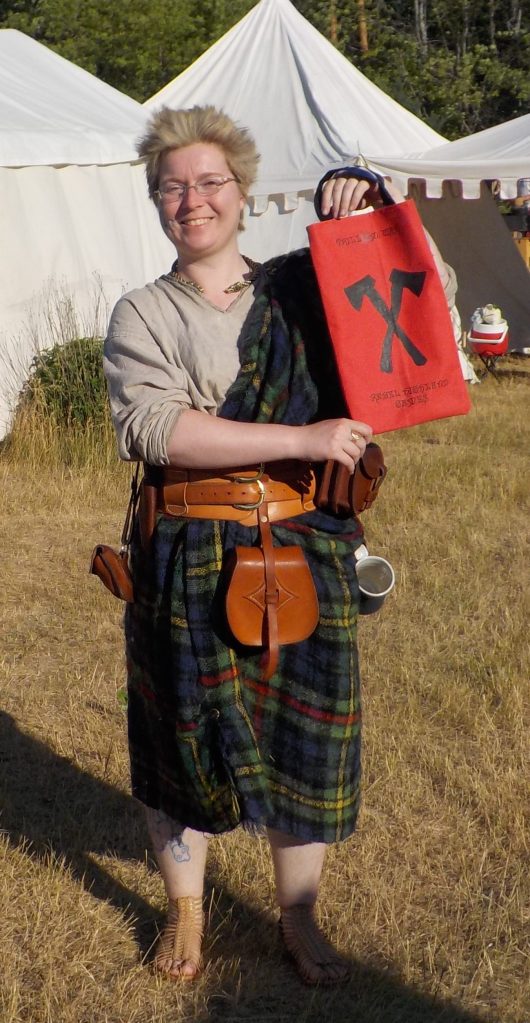 The day before I had gathered the kids in camp who wanted to try the faux woad (blue coloring pencils with tips soaked in water). They really enjoyed drawing on themselves and eventually ended up having a blast drawing all over me – sorry I don’t have a photo of that (I’m usually the one behind the camera). To keep in theme of my Pictish persona I ended up washing a lot off, though I did enjoy the hearts and dragons that were contributed while I had them 🙂

Though this image I had taken of my post faux lime washed and spiked hair didn’t do justice to how white it actually came out. But this following photo taken by Master Eirik Andersen really did show how pale it turned out.

Image by Master Eirik Andersen of TwoRavens.org – Cropped by Ruadh

When it came to washing it out it just needed to two washes (I typically use dove soap). I’ll sure be using it again 😀

It was a weekend filled with great activities and comradery to which I’ll share with what photos and videos I’ve captured of the event. Feel free to keep and share, just credit Rua Lupa when you do use it 🙂 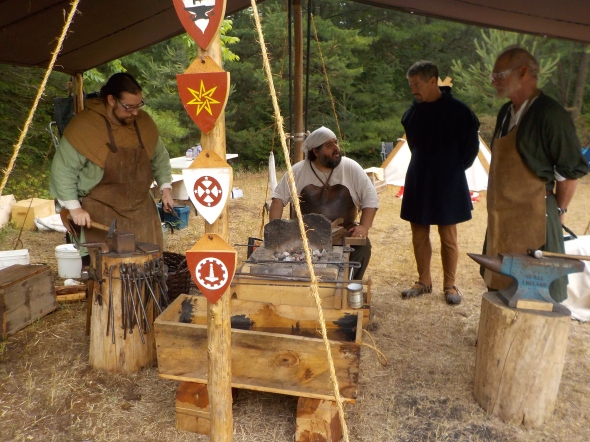 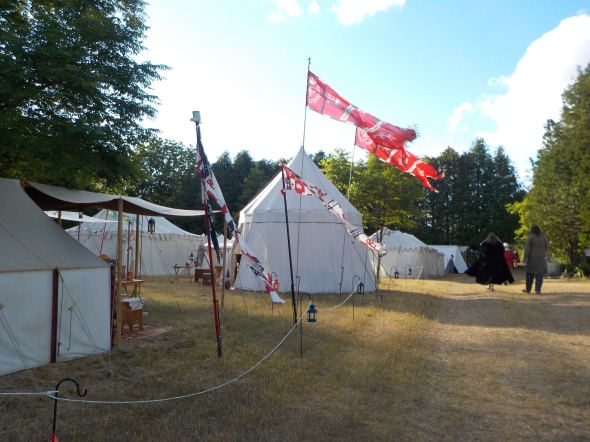 Brief Thunder Shower, Sheltering Under Brewery Competition Tent. Note the use of the shield in the background to keep the rain off

Hunker Hausen is a game we played at Trillium War in the Kingdom of Ealdormere. It is played by two players, each standing on a log almost two meters apart from one another. They begin by holding onto the end of a rope that is about triple the distance between them. Once ready to begin we counted down 3-2-1 and began to pull the rope until taught. That is when the fun begins. You can either try to pull your opponent off or let off some slack so they fall back. With this in mind it is ideal to avoid being left with the end of the rope, because you are really stuck at that point. That is why you try to pull in as much as possible when you start. 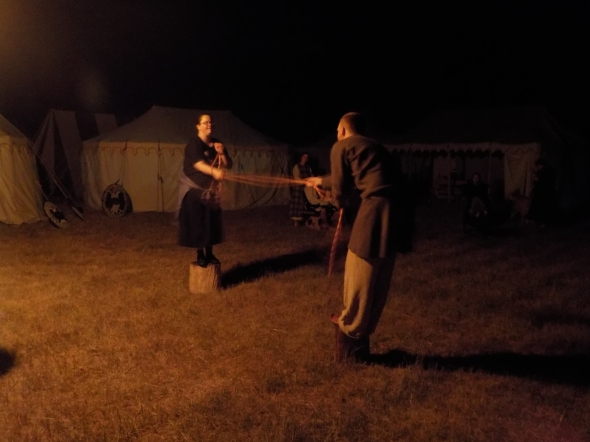 Staff / Pole Wrestling (don’t know the original name) is a two player game – standing side by side with your inner most feet being right against each other and hands placed alternatively with the inner hands in front of your opponent. When ready you try to either have your opponent move their feet (they must stay planted where you began) or let go of the staff / pole. 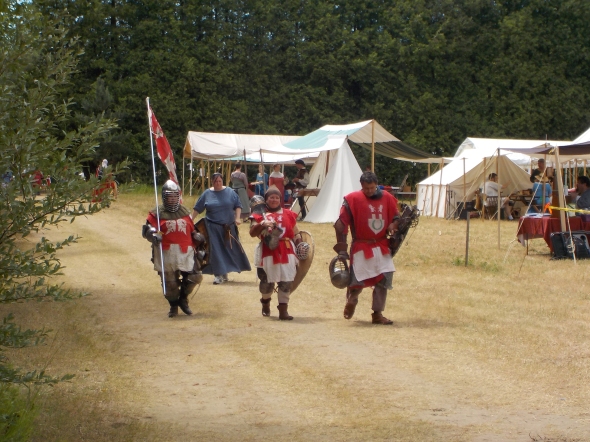 The Rose Tourney is where teams of unbelted fighters (non-Knights) are sponsored by a member of the Order of the Rose. The Order of the Rose is an order of current and former Royal consorts – the person in the royal couple who did NOT win the crown by right of arms.

In the video that follows the related photos you will see when two members are left standing where they mutually are uncertain who got the last blow and end up fighting one on one. Jóbjorn leðrblaka from the Barony of Ramshaven, the Kingdom of Ealdormere, representing her grace Rylyn Buchanan; and Darius from the Kingdom of the East representing her grace Dagmar Halvdan. 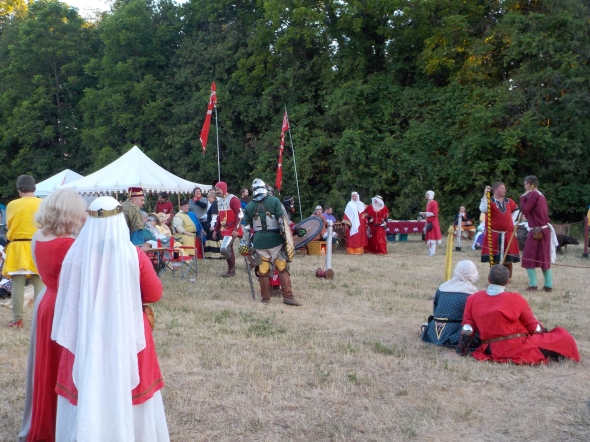 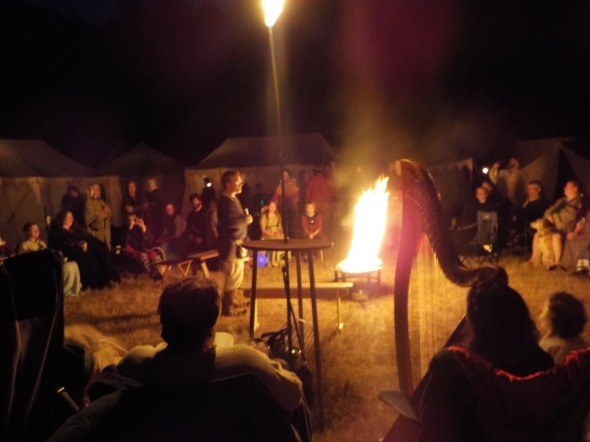 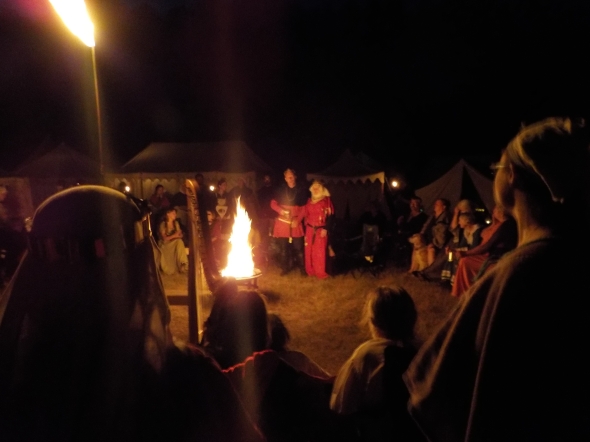 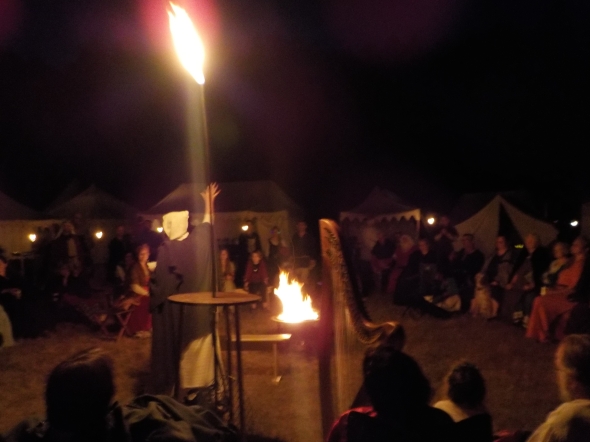 This video is just a sample, because my camera had used up its memory 😦