Baron’s Howe is a Society for Creative Anachronism (SCA) event in the Kingdom of Ealdormere (covers most of the Province of Ontario, Canada) in the Shire of Brennisteinn Vatn (covers the cities of Sault Ste. Marie, Sudbury and North Bay).

You can view previous coverage of this event here.

SHIRE: A local group that resides beyond the boundaries of an established Barony with a minimum of 5 memberships and three offices held – Seneschal, Exchequer, and either a Herald, a Minister of Arts and Sciences, or a Marshall.

CANTON: A local group within the boundaries of a Barony with a minimum of 5 memberships and three offices held – Seneschal, Exchequer, and either a Herald, a Minister of Arts and Sciences, or a Marshall.

BARONY: A large region within and subject to the administration of a Kingdom that hosts diverse activity with an established organization of a full set of Officers, and a minimum of 25 paid members.

KINGDOM: Several Baronies unifying to hold a crown tournament, maintaining its own established organization of Officers. 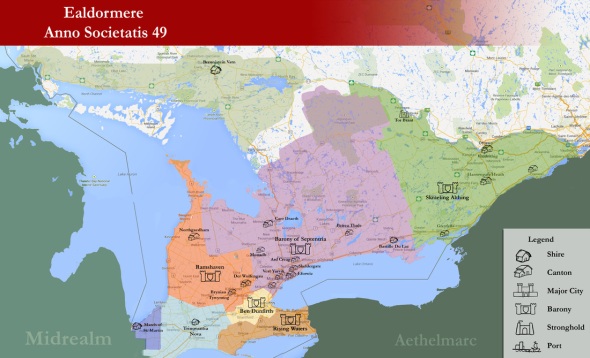 Map of the Shires, Strongholds, Cantons, and Baronies of Ealdormere 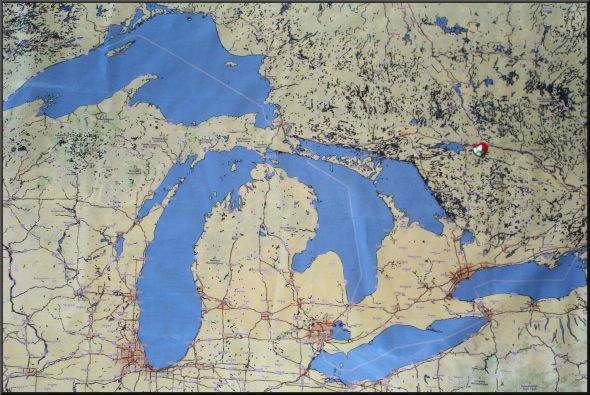 This year the event went from Friday August 31st to Monday September 3rd.

As far as events go, this is by far the most relaxed, most forested, and the only one with such a distinct landscape feature known as “The Bowl”.

The weather, however, tends towards rain this time of year and can become cold at night. Which, for the seasoned camper is not a problem. This year ended up with forecasts for most of Sunday into Monday being Thunderstorms. So attendance was down and most who did attend, stayed through Friday to Saturday. Myself and my family were unable to get the Friday off, so we wanted to stay for the rest of it.

Since I missed the previous day and following morning, I inquired how that went. I was thus informed that on Saturday morning there was loud clanging in the camp, which roused the King into investigating the source of the racket and inform them that such noise is not appropriate so early in camp, only to find out that the clanging was to and had just scared off a nearby bear.

I should be proactive in pointing out that since this is a well forested region of Ontario, bears and other wildlife are around. But with a large number of people and proper food making and storage practices (keep your site clean, and food in sealed containers – ideally placed in a vehicle, not in your tent) wildlife encounters are not a major concern. Many a northern folk are accustomed to seeing the odd bear and in this case I gathered that the bear was just as surprised to find humans suddenly occupying the area and then went on their way.

Shortly after arriving and finishing setting up our camp Court was called.

Here is the account of Court as recorded by His Excellency, and Herald, Justinian Clarus,

This is the Report of the Court of King Baldric and Queen Breyla
Held on the First Day of September
in the 53rd Year of Our Society
at the Battle of Baron’s Howe.
The Court opened with singing, led by the Kingdom Bard.

Their Majesties gave a welcome goblet to one lady who was at her first event.

Their Majesties thanked the event staff.

Court concluded with the singing of “Rise”

At the beginning of court there was the tradition of the Children’s Treasure Chase – a treasure box of toys is given to an appointed adult who then runs and the children chase them down to gain a treasure gift. This event happened to have the one child.

Children’s Treasure Chase. Ilean is the Bearer of the Treasure. One child will be in Pursuit. Photo by Rua Lupa, September 12018 H.E. 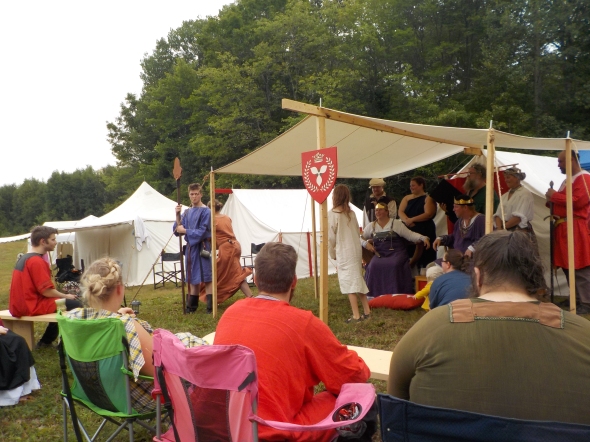 The following photos are of the awards being given during court: 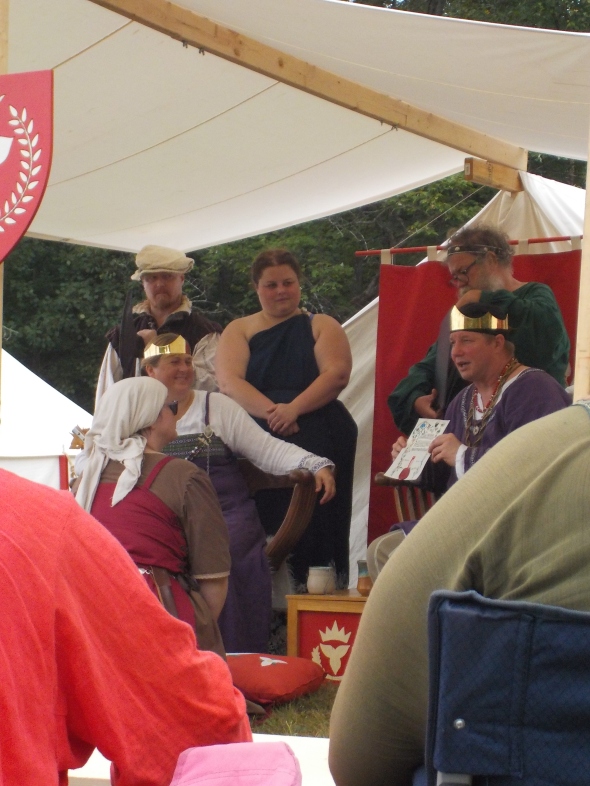 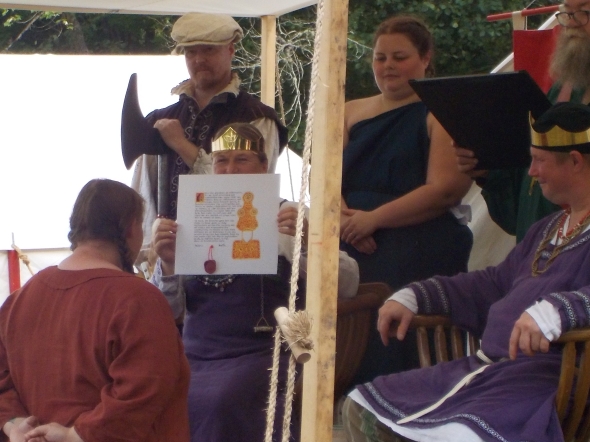 Event Staff Presented with Gift from Their Majesties in acknowledging their hard work in making this event happen. Photo by Rua Lupa. September 12018 H.E.

After court I set off on my task this weekend as new Shire Herald – gathering the signatures for the new Heraldry and Name we worked on online for the Shire!

The Shire has been waiting a long time for this change, having been left off many years ago when the three Shires of the north amalgamated into one and Brennistein Vatn being the place holder until a new Device and Name was done to represent the Shire’s new form.

I am glad to report that I gathered the signatures of all the Shire Folk present, submitted the forms and is now just a matter of time!

Soon after dusk His Majesty graced the presence of the nascent House Blackthorn who provided ample hospitality – namely in the form of homemade mead that Gaius Ulrich is known for.

In that time there was a question asked of King Baldric, to which his answer captivated this House and those accompanying them. The following is an account of what transpired,

I was there at Baron’s Howe, when King Baldric I of Ealdormere, spoke of his thoughts on inclusion in this, Our Beloved Society.

To truly understand the words he spoke, one must know a bit of his own past- he was a paratrooper. An Infanteer. The Man’s Man of Soldiering. Not generally considered a haven for inclusion and tolerance.

Yet, that is not Our King, Baldric Leeman.

We were sitting around the campfire, songs were sung, and libations were drank, and a good time was being had by all. The issue of exclusion in the Society came up, and His Majesty spoke eloquently about certain events. I do not remember his exact verbiage, as I too were libated and sung!

I turned to His Majesty, and said simply “What are your thoughts on inclusion in the Society, Your Majesty?”

I did not know what to expect to hear, but after his expression of support for those who stood tall in the face of discrimination and hate, I knew I would be glad to hear it.

As I said before, I was indeed libated; I do not remember the exact words, and more’s the pity for all who did not hear them. What I do remember, was the.. Love he felt towards the Society. He spoke of the stupidity of judging others on the colour of their skin, or their religious beliefs, or their gender or orientation. He spoke of accepting the people who we sometimes don’t get along with, because everyone had something of value to bring to the society. If someone behaves with Honour, and Courtesy, and Respect, how could anyone find honest fault with them?

All of us have our burdens, so why add to them? Why not accept someone, and strive as hard as we can to make every SCAdian welcome at every fire. To bring together all of the people, no matter their identity, is what this Society was founded upon.

King Baldric quoted Shakespeare to us.

We few, we happy few, we band of brothers;
For he to-day that sheds his blood with me
Shall be my brother; be he ne’er so vile,

The Fire Crackled, Gentle Reader. Not a single sound could be heard over our King’s speech. Our breath was held as he continued, speaking of acceptance, and caring for each other as though we were all one happy family. No one standing outcast for being different.

I have not known King Baldric for long. I only met him a few months ago at Murder Melee. I shared my mead with him, and with all my heart that act has great meaning to me now. His Majesty has drank of my mead, and I am glad of it. An act which, historically, holds significance. A bond.

I hope that one day, we will drink Mead, sing songs, and laugh together again. I am but a humble Roman, but I assure you of this, I am glad to have met King Baldric Leeman I. I am gladder still that a man such as He is my King.

-Gaius Ulrich, the Shire of Brennisteinn Vatn, Kingdom of Ealdormere

Alas, I was not present for this, as I only made my way to the camp of House Blackthorn after his Majesty bid those who he passed a good night. It was a merry camp with much song and libation. I had brought out my djembe and we played and sung deep into the night. The passing rains could not hinder the spirit of this house! Their fire roared ever on!

The next morning we chatted and crafted away in the shelter of Laura and Cesare’s canopy.

Come noon, many broke camp and headed home. Sadly this included the Axe Throwing Range that I had not got around to throwing at this year. NEXT TIME! Thanks Dan and Jo-ann for providing the range for the event!

On leaving an idea was proposed to help it be less rainy in the future, appeasing Baron – the Horse who once lived on these grounds and gave rides and is buried there. Hence the event’s name. One idea that got everyone most excited was making a Chalk Horse on the Ridge of The Bowl of Baron for Baron. And each year it can be maintained at the event of Baron’s Howe. We shall see if anything comes of this.

Those who stayed were willing to brave what storms to come.

In the end, the storms held off the whole of the day and into the night! Does Baron like the idea then???

In the last hours of the day Arnora busted out some Bubbles!

Aquamanile Rider Has A Thought Bubble Manifest In Response To Witnessing His Horse Being Kissed. Photo by Rua Lupa. September 12018 H.E. 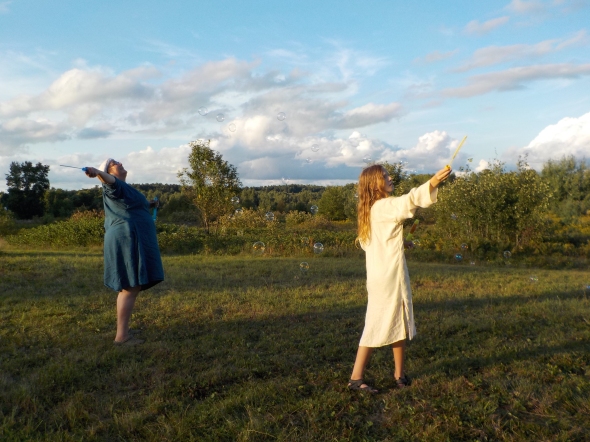 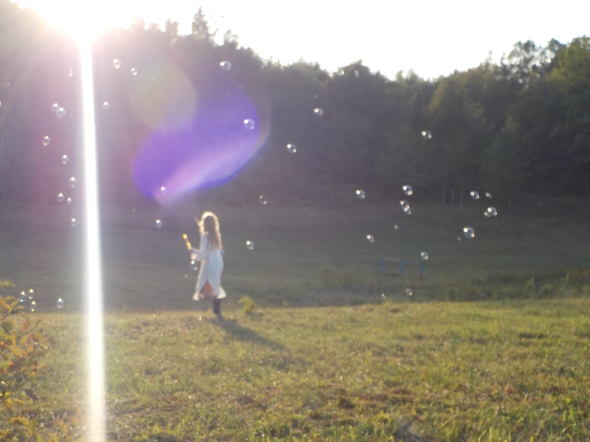 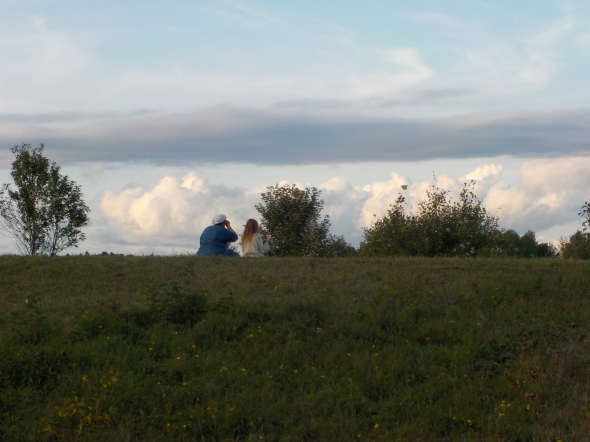 That evening Lucrece shared her “Wood Gas” Fire Box with us!

After everyone went to bed and began to sleep a fierce storm crashed through the area. Lightening was flashing almost every minute. The rain was so heavy that once you thought that it could not get heavier, it did. Counting the time from lightening flash to thunder rumble, the worst of it stayed a long way away. But it was flashing so much that I needed to cover my head with my cloak in order to get some shut eye.

Come morning the area was calm and cloudy. Our tent ended up being a lot less wet than expected and were able to pack up without much problem and managed to be off before the next predicted wave of weather came through.

I had a great time, caught up with old friends and made some new ones. I do not plan on missing this event come next year and I invite you to join me then!