I was going to leave the “So Long Thanks For All The Fish” message up on Patheos for a while before putting in a formal notice so readers had a better chance to get the message if Patheos did what they had previously done to other writers.

This morning, after three days of having taken both my and Lupa’s writing down from Patheos. I was blocked from accessing the blog and all of our writing has been put back up.

Having never signed the new contract, especially since it was never sent in my name,

and thus still under my original contract. I have the legal right to terminate my contract with Patheos, thus, upon this termination, all my writing is no longer permitted to be used by Patheos.

Patheos is therefore illegally using all the writings done by writers who terminated under their old contract and wanted their writing taken down.
To make it all neat and official, I sent an e-mail to Patheos CO, and a formal hard copy, photographed as evidence, was sent to:

Official Notice of Termination of Contract 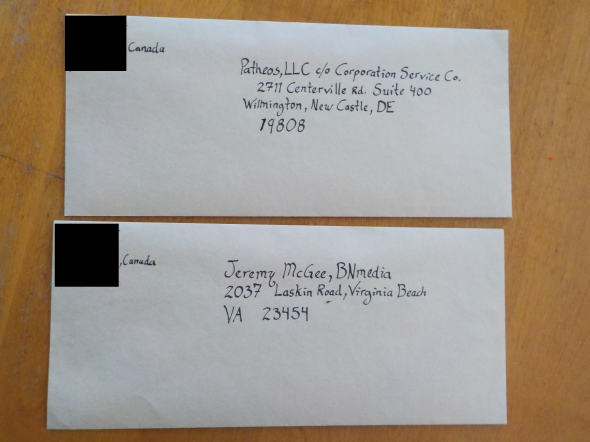 Two copies of Official Notice of Termination of Contract Mailed To Both Addresses. These were also Date Stamped at the Post Office.

I hope that other writers who have not already done so will follow suit to put all the pieces in place for a legal termination of contract. And thus can make collective legal action if Patheos refuses to take our writing off their site.

Through discussing with the Patheos Pagan channel Editor, it has been revealed that there has been some misuse and misunderstanding of the term “perpetual” as seen in the original contract. So I will clarify,

PETITION: Help us writers get back control of our intellectual property by signing this petition.

Having reread over the old contract to see if I may have missed something, there is a clause that completely counters the Termination clause, it being called a Survival Clause.

“Survival; Binding Agreement. All promises, covenants, agreements, representations and warranties contained herein related to existing Work shall survive the termination of this Agreement. This Agreement shall bind and benefit the Parties and their respective successors and assigns.”

An interesting point about this is that Patheos and the Channel Editor should have mentioned this specific clause instead because that in itself negates any Termination of the Contract. And including such a clause implies that the perpetual license clause that was used to justify keeping our writing up is not indefinite in itself, otherwise there would be no reason to have the Survival clause.

In other words, this contract is entirely self contradictory in including this Survival of Contract, and a clause for Contract Termination. Where it is saying you can terminate this contract but… you can’t.

The other thing is that those writers who have been earning money from their blog should then technically be continually receiving payment for their page visits. But by being blocked prevents the writers from holding the Host site accountable for their end of the deal. After all it did state, “This Agreement shall bind and benefit the Parties and their respective successors and assigns.”

What follows is important,

The internal inconsistency of have a Termination clause when it ultimately is nullified by a Survival clause, along with not holding their end for ensuring that writers can continue to monitor and receive royalties makes this contract invalid / unenforceable.

With the way the previous owners operated, it was in essence a benevolent ruler, and honestly don’t think I would have minded leaving my work up had things remained that way. With the way that the new owners have done things, it is not so benevolent. And the affiliations that were revealed when there was push back from the new contract were problematic to say the least. Which is the core reason for most writers leaving. And why I left the way I did. And begs the question of the writer’s rights who have deleted any of their content, for any reason, to find it republished by Patheos and refuse to have it taken down, and possibly, ultimately block you like they already did others.

It is possible all my work I wrote on Patheos will not ever be taken down. I regret signing on so trustingly. But either way, I am satisfied in having left.

The following is relevant information added as they are found that may aid in this case,

Added March 10, 2017:
Take Down Project.org – “The Takedown Project is a collaborative effort housed at UC-Berkeley School of Law and the American Assembly to study notice and takedown procedures. Researchers in the US, Europe, and other countries are working collaboratively to understand this fundamental regulatory system for global online speech.“

Terms of Service and Human Rights: an Analysis of Online Platform Contracts
see page 47 “Contradictory Clauses“,
page 79 “License on Shared Content“,
page 84 “Notification Requirements before Termination of Services“,
page 86 “Conflict Resolution among Users“,
page 90 “Imposition of Specific Jurisdiction for Dispute Resolution“,
page 96 “Freedom of Expression“,
page 98 “Platforms do not provide notification if there are restrictions on freedom of expression“,
page 100 “Privacy“,
page 104 “Judicial disputes are usually subject to a number of limitations on the access of users to justice“,
page 130 “Privacy & Data Protection“,
“Lastly, platform operators shall always permit their users to delete their account in a permanent fashion.84 Likewise, if there is no other legal reason justifying the further storage of the data, the data processor shall proceed with the permanent deletion of all or portions of the relevant data associated with the platform user’s account,85 in a time that is reasonable for its technical implementation. While anonymous data (see definition a) can be kept and processed without consent, pseudonymous data (see definition r) should not be subject to different treatment in that regard.”

Wildlife Memes: Foxes »
« So Long And Thanks For All The Fish! (For Patheos) UPDATE

One thought on “UPDATED – Patheos: Blocked From Blog & Put Articles Back Up. Official Contract Termination Sent.”