Where Rapists Come From

I came across this story on the BBC about a boy who married their rapist with whom he had two children with, and saw that as a clear example that contradicts the commonly held perception that only men rape. Both men and women can be rapists and there is just as much need for support for male victims of rape as female victims of rape. But to even begin to address the issue of rape, we have to admit that rape is prevalent and that means it is somehow culturally cultivated – which is why we now have the term Rape Culture.

All too often male rape victims are ignored and given the same negative treatment female rape victims get – especially as men are perceived to be incapable of being raped due to their physiology (“if you were hard, you must have wanted it”). While in reality the cold, fear, and even death can all cause the body to mimic the signs of sexual arousal in both men and women.

This is where we need to change the societal story of rape victims being at fault (“you really wanted/asked for it”).

Image links to article on how our current predator/prey model of sexual relationships is harmful to both men and women.

It is never the fault of the person who was raped, so lets get to the real problem – rapists themselves – making the societal story of rape be the fault of those individuals initiating non-consensual sex.

Rapists are not a mysterious monster that suddenly appears and just as suddenly disappears because of the actions of the victim. They are people in our communities who chose to act non-consensually, who can be addressed, own their actions, receive appropriate consequence for those actions, and be rehabilitated so that they do not recommit.

That last bit does not seem to ever happen and thus it’s not surprising that rapists recommit rape. If the rapist is simply unable to be rehabilitated, then they really should be prevented from reentering society all together. But the majority are capable of rehabilitation, and the reality is that rapists who get jail time (an appallingly low number still do not even get that because people victim blame and thus under reporting of rape) do go back into society. So we really should work on preventing these rapists from re-offending. 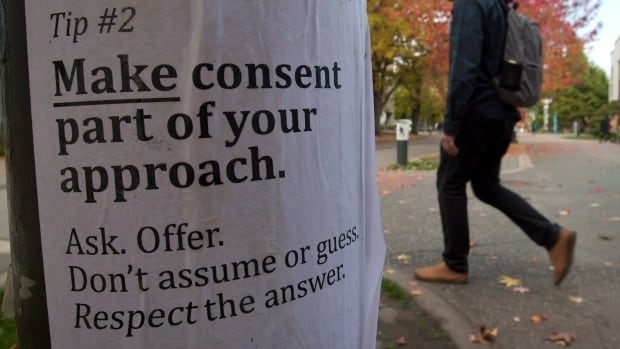 The Ontario sex-ed curriculum was revised in 2015 to include discussion of consent, but some Toronto students say schools still need to place more emphasis on the topic. (Canadian Press)

As a society, we have neglected our education on the emotional and psychological side of sex. And this is where providing consent education to the public is extremely important, as it clears a whole slew of misunderstandings that can occur and lead to rape.

After all, Consent education has proven to be the biggest prevention of rape, and thus should be taught at every level. Secondary School, Colleges, Universities, Community events – like Gay Pride Parades, and on social platforms – such as sharing the video below and the image following that on Facebook.

Even grade school kids can learn about consent – most easily when it comes to playing games. For example, monkey in the middle – does the person in the middle consent to being in that role? If not, that is abuse. Tickling is a very common scenario – if you start tickling someone without their permission/consent, especially if they indicate that the tickling is unwanted, and you continue anyway – that is not consensual play. That is abuse.

It is commonly expected for children to give and receive hugs and kisses, to the point of it being acceptable to socially pressure children to comply. But we should never force anybody to have physical contact with someone to be considered polite. This is where everyone should start learning about consent. If we do not respect children’s autonomy then how can we ever expect them to become fully functional adults?

People who were never instilled with how to navigate the concept of consent and respect with regards to that, are at greater risk of being rapists. What we need is a more nurturing environment for people to learn to respect consent and autonomy in all aspects of their life. In this way, we can shift the culture of tolerating and promoting non-consensual sex to a culture of universal respect. And everybody wins.